In this post I'm planning to shed light on one technical limitation, that is important to overcome in next Robomongo versions. It is about current approach, that is used to integrate Robomongo and MongoDB shell. If we will solve this problem, many possibilities will be opened for further improvements in Robomongo.

Robomongo integrates with MongoDB shell by means of static linking. Linker produces single executable file with both Robomongo and shell inside it. Below is overly simplified memory layout of running Robomongo process. 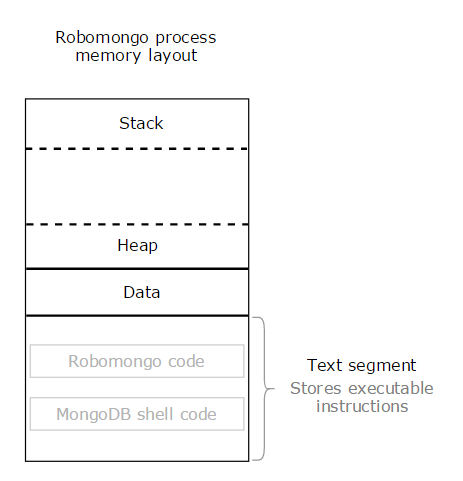 As you can see, heap and data segments are shared between Robomongo and MongoDB shell. Stack is actually not shared, because Robomongo executes shells in a separate threads, and each thread in a process gets its own stack.

There are several limitations of such Robomongo design. Most of them are consequences of the fact, that MongoDB shell wasn't designed for embedding in a strict sense. MongoDB shell is designed to be executed as a single instance inside single process. It wasn't designed to support multiple shells (or scopes) inside one mongo tool. Here I'm speaking only about the shell, not MongoDB database itself. This is not a problem or limitation of MongoDB shell, because such constraints are by design — if you want to have a second shell, type mongo in another terminal. Nevertheless, it is problem for Robomongo, at least for the current method of integration.

Here are the practical limits of the current Robomongo design:

Possible solution for the issues mentioned above could be a separate process for each shell. From UI perspective it means, that each newly created tab will be served by separate MongoDB shell process. Integration between Robomongo and shells could be implemented using some form of inter-process communication (IPC). 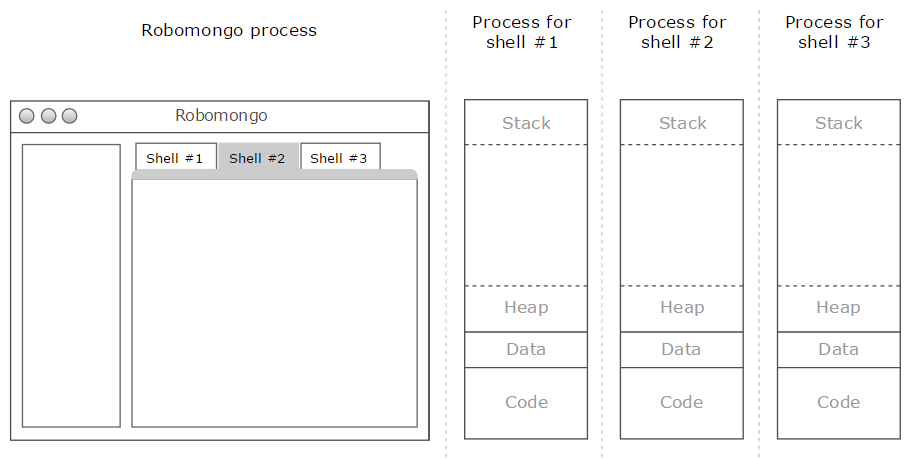 Such approach is not new and something similar is done by Chrome, where (almost) each tab is served by an engine in a separate process. They even call this a Multi-process Architecture.

This type of architecture will allows us to:

We are planning to implement this change in Robomongo, among many others. In this blog I will write not only about 7 major features which are the first priority for us, but also about our future plans and improvements that we have prepared for Robomongo. There are a lot of them!

20 days journey to bring a support for MongoDB 3.x has been started

The New Year is very close and everyone makes preparations to celebrate it in the best way. Here at…

If you watched short movies [http://robomongo.org] about Robomongo, you probably know that I'm broken off between Robomongo…